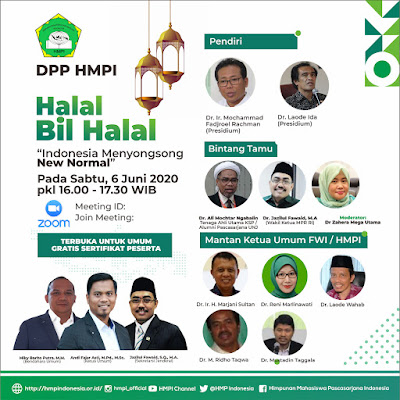 In the midst of the decline in covid-19 cases, governments in the world began to implement the new normal protocol, including the Indonesian Government. So what should we do in the new normal era?

Ahead of the implementation of the "new normal", I attended a discussion held by the Indonesian Postgraduate Student Association (HMPI, Himpunan Mahasiswa Pascasarjana Indonesia) which was attended by various national figures, former leaders/presidium and activists throughout Indonesia.

The event that was held at the zoom meeting (6/6) was attended by Spokesperson for the President of the Republic of Indonesia Fadjloer Rachman. Rachman, as a founder of Forum Mahasiswa Pascasarjana (Forum Wacana, old name of HMPI) said, "HMPI is the biological son of reform, whose movement is grounded in science." At the age of 22, he hopes that HMPI can continue to be faithful to science-based reform and democracy.


Presidential expert staff member (KSP, Kantor Staf Presiden) Ali Mochtar Ngabalin has delivered "taushiyah kebangsaan" (advice for nationalism) for all participants. There are three things, Ali said, that our students must pay attention to, namely improving the quality of self, caring for the network, and improving language skills. "Those three things must be present in each of us so we can continue to learn and contribute to the nation," said Ali, who holds PhD from Universitas Negeri Jakarta.

This meeting also agreed to prepare the HMPI National Conference (Munas, Musyawarah Nasional) as best as possible by inviting the Indonesian President. In addition, HMPI will prepare history books related to the journey and contribution of the HMPI for the Indonesian people as biological children of Indonesian 98 reform.

The event was hosted by Zahera Mega Utama and opened by HMPI Chairperson Andi Fajar Asti. Former presidents and presidium present included Marjani Sultan, Reni Marlinawati, Laode Wahab, M. Ridho Taqwa, and Mustadin Taggala. The Secretary General of HMPI who is also the Deputy Chair of the Republic of Indonesia's Republic of Indonesia H. Jazilul Fawaid closed the event by giving the message that HMPI can continue to contribute to the progress of the nation.

So what should students prepare for in normal new times? First, preparation for college planning. They need to plan when completing their college work and also their education. Second, they must also remain active in giving fresh ideas to the government because the government needs input from various groups, especially from sholar. Third, keep abreast of health protocols that have been determined by the government to stay healthy, safe from covid-19 and can be productive in their respective fields. 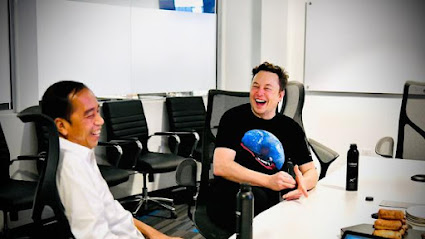